Seating Information:
For information on accessible seating and to view the Williams-Brice Stadium seating chart page. 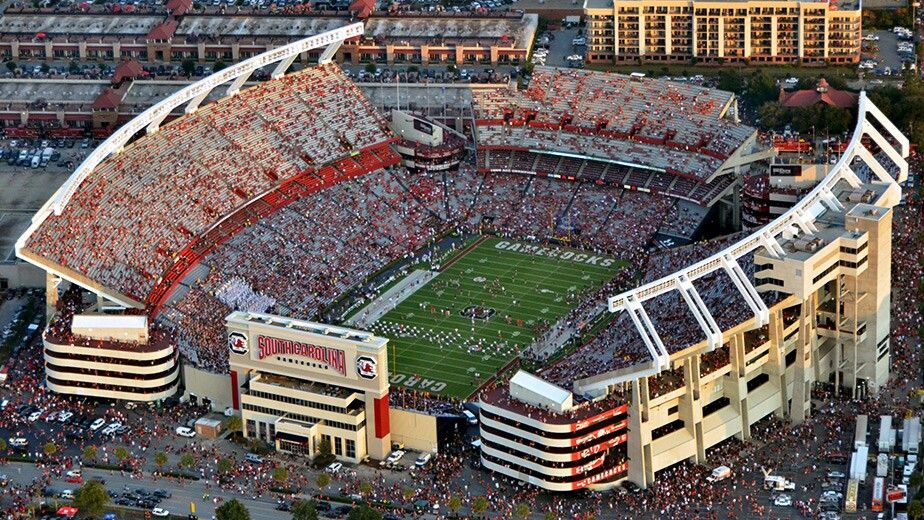 It is currently the 20th largest college football stadium in the NCAA.

As if everyone is just too eager to be able to sit and enjoy the games, Carolina football teams consistently attract standing-room-only crowds to Williams–Brice Stadium. The electrifying atmosphere on game days has been voted “the best” by SECsports.com in 2005 and 2007.

Thanks to its home team’s name, the stadium is referred to as “The Cock Pit” by Gamecock fans and local media. The nickname has been commonly used by these groups as early as the 1970s when the university held a fund-raising campaign to raise money for an AstroTurf playing surface, called “Carpet the Cockpit”.

The stadium was originally built in 1934. It was with the help of federal Works Progress Administration funds as Columbia Municipal Stadium that helped fund the Williams-Brice Stadium. The current venue was built to replace Melton Field, an aging wooden structure that was located exactly where USC’s Thomas Cooper Library stands today. Prior to the opening of the new arena, All USC football games except for the annual Thanksgiving matchup with Clemson had been played at Melton Field. The Clemson game was the only game played at the South Carolina fairgrounds at the location that is now Williams–Brice Stadium. Williams–Brice original seating capacity was at 17,600, in what roughly corresponds to the lower level of the current facility’s east and west grandstand seats.

The renovation was funded by the estate of Martha Williams and Howard Brice, who left some of their estates to USC for stadium renovation and expansion. Her late husband, Thomas H. Brice, played football for the Gamecocks from 1922 to 1924. In their honor, the expanded stadium was officially renamed Williams–Brice Stadium on September 8, 1972, by a bequeath from their nephews Tom and Phil Edwards.

The stadium is considered one of the loudest and most intense venues in the country. ESPN’s GameDay crew has broadcast its show eight times in total. ESPN also used a photo of the stadium in its advertising to promote its GameDay show throughout the 2005 college football season.

Over the last 10 years, nearly $30 million of renovations and improvements have taken place at Williams–Brice Stadium. All these renovations brought the official capacity to 80,250. The addition of the upper deck in the south end zone includes “The Zone,” which is an 11,000-square-foot (1,000 m2) banquet facility. Other upgrades were made to the box seats, executive suites, and athletic training facilities over the years too.

The latest renovation was done in 2015, where the surface parking lot surrounding the stadium was replaced with a landscaped promenade and it was named “Springs Brooks Plaza”. The named was in honor of the family of Robert H. Brooks. The project included a half-mile of ornamental fencing, planting of 340 trees, the installation of 220 light poles, and 38 benches. Additionally, a restroom building, a 12,000-square-foot structure housing ticket sales, and a merchandise store were added to a command center for EMS and police. The project expanded the number of ticket windows from five to eight. It also enlarged the student entrance and relocated parking for television trucks to improve the flow of pedestrian traffic.

In addition to serving as the home of the Gamecocks, the stadium has been the site of many concerts, state high school football championships, and various other events such as concerts by U2, Metallica, Guns N’Roses, Paul McCartney, and The Rolling Stones. It also hosted the annual Palmetto Capital City Classic between Benedict College and Johnson C. Smith University until the last game in 2005.